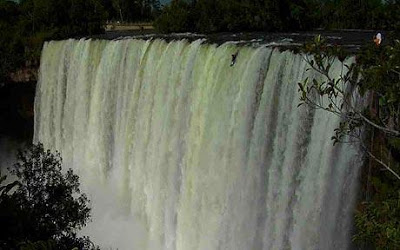 The name to write in the book is Pedro Olivia.

He hit speeds of 70mph in his freefall down the Salto Belo falls into the waters of the Rio Sacre, a tributary of the Amazon in Brazil.
The stunt, which took just 2.9 seconds, shattered the existing world record for a descent in a kayak which stood at 108ft. He survived thanks to unique combination of currents which have been created what kayakers believe to be the softest water landing in the world.
The 26-year-old Brazilian had scoured the area searching for the perfect spot for an attempt on the record.
With a drop almost twice that of Niagara Falls, an estimated 5,000 cubic feet of 70F-warm water gush over the Salto Belo every second.
But the 26-year-old had to tour the 100ft-wide waterfall in search of the perfect boulder-free spot before embarking on his attempt.
Members of his Brazil World Record Attempt Expedition team watched anxiously as he finally slid over the lip of the falls, as they captured the terrifying stunt on camera.
Hurtling head first to the bottom, he disappeared from sight as he plunged into a deep pool at the bottom.
Moments later he emerged, unharmed, behind the waterfall and was even able to right himself by grabbing onto a boulder formation.
“Although people have certainly perished upon hitting a pool of water from such heights, the team counted on the massive, gushing rivers of central Brazil to produce the softest water landings on Earth,” said Ben Stookesberry, a member of the team.
Although the Niagara Falls, on the US-Canada border are higher, at 176ft, the actual drop is only 70ft because of rocks at the base.